My finale must be my most favorite of all, El Sheikh Imam’s “Valerie Jescar Destin”. This song was first released in the 60s, after Valéry Giscard D’Estaing (1974 to 1981) became the elected French President.

It is a sarcastic song, you see people all around the Middle East were optimistic with D’Estaing in a manner similar to their optimism with Barrack Obama coming to office in our current days.

In a similar manner, too they were in for a huge bummer.

His program called for astonishing things like social justice, equality, and citizen rights.

What actually happened in his era is quite similar to Italian Prime Minister Silvio Berlusconi’s attitude toward Qazzaffi nowadays.

It is well known through history studies that there were two special incidents that mark D’Estaing’s presidency period.

First, his refusal to let Mokhtar Ould Daddah the appointed French Mauritanian Leader then, to be over thrown by Polisario Guerillas (the opposition then) under any circumstance whatsoever. This led him to launch “Operation Lamantin”, especially for Daddah’s aid. Daddah was over thrown anyway later on by his own army and D’Estaing was forced into an agreement with Sahrawi Resistance.

Second of all, and much more controversial is his involvement with Jean Bedel Bokassa’s Regime in the Central African Republic, which landed him in the middle of a diamond smuggling operation run by a dictator. He supported Bokassa’s Regime militarily and financially and when Bokassa fled all his money was wired to French banks.

D’Estaing was accused with accepting money and jewels in return for his backing up.

In addition, he was a capitalist who supported and called for the formation of the European Union and Open Markets.

That led to a never seen before percentages of unemployment similar to the ones witnessed after World War 2.

Ahmed Fouad Negm makes fun of D’Estaing in an incredibly entertaining poem that is sung by the one and only Sheikh Imam.

And his wife too

Will bring the wolf from his tail.

And feed every last hungry man

To all the gentlemen

We will see days and nights never seen before

And life will be just crazy

Televisions will be colored

And cars will fuel

A great renaissance will take place

And we will finally be worth something

In theatre or cinema

Or even at the zoo

And we will never need Syria or Libya again

And an Arab Union will finally be formed

With London and the Vatican

The poor will eat sweet potato

And walk around all cocky

And instead of naming their children “Chalata”

They will name their kids John

All that is thanks to my pal

Nor Shelter Nor company 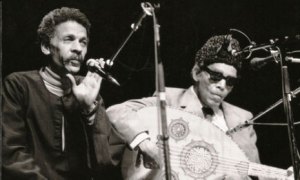